The Liberation of the American Woman 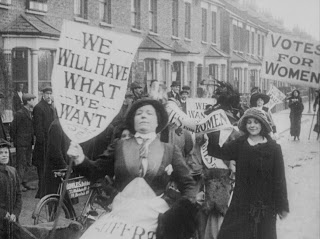 In 1848, a small gathering of both women and men formulated
a plan. The righteous endeavor called for the fair treatment of half the
population of the United States. What we now take for granted was initiated with a document patterned after our Declaration of Independence. It was
called the Declaration of Sentiments.
So began a long battle for equal rights. It expressly
demanded the right of women to vote. Seventy-two years passed before federal
law amended voting rights to include the voice of women. Over time, other
mandates of that original movement were met satisfactorily by the law. Of
course, more demands of an absolutely fair nature were added to the complaint
and requirement of the American woman. But the tone of that first cry for
change now clashes with our culture, and the vision of the document which was
the foundation of a movement is now clouded.

From Resolutions in the Declaration of Sentiments:
Resolved, that woman has too long rested satisfied in the circumscribed
limits which corrupt customs and a perverted application of the Scriptures have
marked out for her, and that it is time she should move in the enlarged sphere
which her great Creator has assigned her.
Resolved, therefore, that, being invested by the Creator with the same
capabilities and same consciousness of responsibility for their exercise, it is
demonstrably the right and duty of woman, equally with man, to promote every righteous cause by every righteous means; and especially in regard to
the great subjects of morals and religion, it is self-evidently her right
to participate with her brother in teaching them, both in private and in
public, by writing and by speaking, by any instrumentalities proper to be used,
and in any assemblies proper to be held; and this being a self-evident truth
growing out of the divinely implanted principles of human nature, any custom or
authority adverse to it, whether modern or wearing the hoary sanction of
antiquity, is to be regarded as a self-evident falsehood, and at war with
mankind.
­­­­­­­­­­­­­­­­­ 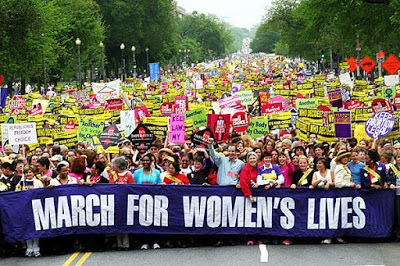 What is deemed righteous by society certainly alters over
time. No doubt, the women who recently marched to voice their demands
consider themselves agents of morality. They require the law maintain their
rights, which they feel are now encroached upon by a perceived change to the
atmosphere of ethics. The thoughts and ideals of the writers of the Declaration
of Sentiments mean little now in the history of the American woman
demanding change. Her demands have been met, but did she lose sight of the
burden which now whispers from that sanction of antiquity? 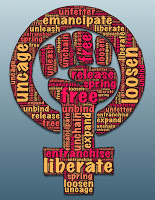 How did she move so far from considering the great subjects of morals and religion? She is now free to
live as she chooses. Perhaps she must still fight to keep herself free. She must
struggle to rise above the assertion that she is not who she proclaims herself
to be. She is still, after all her wars, a woman. And she still must yield life to the next generation.
Is this what the fight for equality has become? Have we
taken a step too far into a modern battle of women against womanhood? The women’s
movement in this country brought an end to the law prohibiting birth control,
first among married couples, then later among single women. A plausible
grievance met by a reasonable change to the law, though some may disagree. It
didn’t keep abortion from becoming the focal point of the condition of the
American woman. Instead, the right to end life by choice has usurped every
other consideration. At least that’s how it appears. If it is not the
entitlement most desperately demanding preservation by this recent movement,
then they are not representing themselves well enough to be understood.
Are those early demands which evolved into the current angry cry now irrelevant? They have at least some basis in a much
older documentation of equality. Liberation first occurred, and perhaps a movement
began, when Christ broke the agreements and constraints of culture and cast
aside the exclusion of women from His plans. No matter how much we kick against our great Creator, He desires to draw us near without bias. He does not offer grace
to one group above another. We are all equal. More equal in the eyes of God than in the opinion of society, or the appraisal of government, or by our own
pensive declarations.
There is neither Jew nor Greek, there is neither bond nor
free, there is neither male and female, for you are all one in Christ Jesus. Galatians
3:28
abortion