As a writer who enjoys the stranger side of fiction, I’m
always interested in the latest developments from the minds of our most prominent thinkers. These are the leaders in science who, I assume, have the best interests of the human race in mind. In my novel,Wake the Dead, I take an average guy and turn him into a
transhuman. A good deal of the nonsense I made up was based on research of
transhumanism and, in the plans of a great number of regular humans, it’s not
nonsense. The story of the world’s first transhuman continues in Killswitch, and the trilogy will wrap up
in a few months with Transfusion.
Even though I enjoy the weird subjects, I must put my own
spin on the oddities. And that means addressing each aspect of mind-blowing
science from a Christian worldview. I see the transhuman future coming, but I
see the King of Kings returning before we turn ourselves into a new race of
cyborgs.
Every few months I like to take a look at what’s new in the
world of tranhumanism. Not many people—hardly any Christians—have ever heard of
the subject I chose for my first three novels written for the Christian market.
Maybe not the best plan for marketing novels, but I saw a need for something
different, and I like to think I helped meet that need.
Here’ s the dictionary
definition of transhumanism: 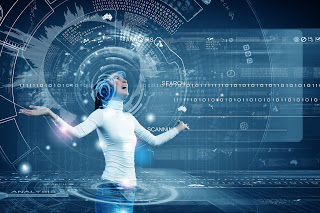 The belief or
theory that the human race can evolve beyond its current physical and mental
limitations, especially by means of science and technology.

My latest search into what’s coming soon for the improvement
of humanity led me to three articles. You can read the articles by clicking the
links at the end of this post.
First, some corporations have gifted their employees with
RDIF chips, replacing their ID cards with implants which allow them to
accomplish various tasks without waving the plastic. A wave of the hand is all
that’s needed. The article tells the number of humans who’ve already chipped
themselves for “safety and security” and refers to a recent bill passed by the
House of Representatives that makes chipping the mentally ill sound like a
great idea.
Second, an article reveals that scientists have created, and I use
the word loosely, a pig-human hybrid. Of course, the purpose is not to make a
monster. The reasoning behind the new life form is to save human lives by
growing enough transplantable organs to meet the growing demand. But what is
this being, so far only presented to the public as an embryo? If the chimera
(part man/part animal) thrives beyond this stage, will it be more pig than man?
Or will the mind of this “creation” have a reasonable understanding of its
manhood? In which case, will pulling out its designer organs infringe upon its…upon
his rights?

And third, if the pig-man doesn’t meet your needs in the
future, scientists have developed the first stable semi-synthetic organism. It
doesn’t mean much right now, but in theory it could mean everything in the
future. As with most advancements, including the pig-man and the microchipped
populace, it has the potential of leading to wonderful benefits for the human
race. Life as we know it could be radically altered for the better. In this
article one
of the scientists who helped accomplish the impossible is quoted as saying,
“Now we can get the light of life to stay on.”
Now here’s where the lover of pop-science takes a step back,
and the Christian says, “Hey, there’s something familiar about the way he put
that.” The scientist refers to the light of life. His insinuation is, I
believe, to take hold of that light. To control it. But here’s what I know
about the light of life:


Again Jesus spoke to them, saying, “I am the light of the world.
Whoever follows me will not walk in darkness, but will have the light of life.”   John 8:12
The maker of light and giver of life is not
handing over His sovereignty to anyone. He may give us enough knowledge to make
discoveries, enough fortitude to improve our existence, and enough fear to try
to avoid death, but we are still at best inventive, even creative, creatures. Not the Creator. The light of life is Christ. The light is mine because I follow Him,
and it’s enough for me. I don’t worry about the pig-man or the microchips. I
don’t even worry about all the things that happen to my poor fictitious
transhuman. In the end (spoiler alert) the light of life is enough for him,
too.

1  WANT A JOB IN THE FUTURE? GET READY TO BECOME A CYBORG
— COMPANIES HAVE BEGUN IMPLANTING EMPLOYEES WITH RFID CHIPS
http://www.thedailysheeple.com/want-a-job-in-the-future-get-ready-to-become-a-cyborg-companies-have-begun-implanting-employees-with-rfid-chips_022017