I read
international headlines from prominent publications, and some from
not-so-prominent fringe sources. I’ve done this long enough that the shock
value is low. I’m no longer incensed when the Pope declares that America needs
to be ruled by a world government as soon as possible “for their own good.”1
I’m not shaken
by reports about who might use which restroom at the drug store where I
frequently shop.2 Nor am I surprised to learn we might
need to pass a law in order to keep public schools from adding gender identity
to their curriculum.3
I do
carefully consider the topics of war in the Middle East, of my own government
slipping away from its Constitution, of threats of terrorists and dictators.
These reports are numerous and at times unsettling. But the news stories
hitting me with the realization that the Age of Grace may soon culminate are
the ones about the leaders of the Church. Not the aforementioned Pope, but the
accessible clergy of other denominations who, at least in name, oversee the
followers of Christ.
One recent
article extolled an interfaith assembly of ministers for blessing an abortion
clinic, it’s doctors, nurses, and patients. They prayed for God “to keep them safe and
keep them strong. And may they always know that all that they do is for Thy
glory.”4 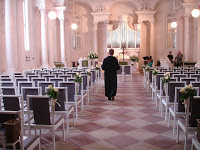 Another
newsworthy event was a “renaming ceremony” for a Lutheran pastor in transition
from female to male. Rose became Peter and the supportive congregation made it
a church-wide event.5
For the sake
of protecting the freedoms guarded by that slippery Constitution, I accept that
we live in a nation defending all manner of life choices. And I believe we as
Christians are called to be kind to all people. No matter how much a moral
vacuum this lost world becomes, we must remember this good instruction:
If it
is possible, as far as it depends on you, live at peace with everyone. Romans 12:18
I am not
opposed to befriending one who decided to abort. I understand how a woman in
desperate circumstances might choose what I consider unthinkable. I can extend empathy
to a person lured by the culturally promoted exploration of sexuality. I realize
people who do not know their Creator might think it right and acceptable to
recreate themselves. Knowing that I’m not privy to who is led by God to receive
redemption, I can’ t call anyone hopeless. And if I am to demonstrate hope, I
must do so with a kind and gentle spirit.
But when the
leadership of the Church turns kindness toward sinners into the public
elevation of sin, I have to wonder how long God will endure our perversion. Surely
there’s an end to His patience.

Jesus is a
friend to sinners, and we as His followers should be as well. But Christians,
if they are Christians, recognize sin. They know what it looks like, how it
feels, and when they’ve fallen into it. And they don’t call it righteous. We
all fall into the trap of sin at times. I choose to follow Christ as He leads
me to come alongside the lost and sinful with hope of celebrating the glorious
power of the gospel to break every chain. But there must be a stopping point for
tolerance, even if tolerance is the order of the day. For me, the end of my
forbearance is the clergyman, or woman, or man who used to be a woman who
celebrates sin as though it were a virtue, decent and upright in the eyes of
God. I can’t accept that brand of leadership. I don’t want to be so kind to my
fellow human beings as to slap God in the face.
News
sources — click on the titles to read articles:

1 Pope Francis: World Government Must Rule U.S. ‘For Their Own Good’

2 Walgreens All In for Co-Ed Bathrooms

4 Clergy gather to bless one of the only U.S. clinics performing late-term abortions