When Evil Wears a Mask 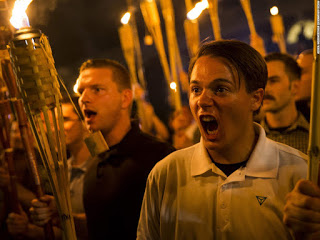 Through the ages evil has presented itself as good,
and many who behold it see only goodness. It was that way in the beginning—in
the Garden. And now, evil seems to mask itself everywhere we turn.
Recent events brought evil into view in
Charlottesville. The obvious wrong of the day was accompanied by something that seemed right. It was the cry of
the New America, a divided country twisting history and fighting to sweep away
the good with the bad. After this terrifying incident, I rummaged through
Twitter to see what the citizens of our country were thinking. Here are a few tweets
that caught my attention:

White nationalist, Peter Cvjetanovic is
upset that this photo of him has gone viral. So please don’t retweet this tweet
1000s of times.

Of
course, the sarcastic challenge took this picture to the heights of Twitterdom,
and nothing about it leads me to think this young man wants to hide behind a
mask of goodness. The evil seems clear. If he portrays himself as a hater, and
he’s surrounded by haters, then he’s a hater. But
evil did show up wearing a mask, both at the event and in the express opinion
of the public. Here’s another tweet:
An American woman was killed by one
group: White Christian Radicals. Use the words.

This
statement wears of a mask of good intention—get rid of Christian teaching
because it’s synonymous with terrorism. But it misidentifies the culprit, and from
an evil idea grows the ever-evolving opinion that to be against Christianity is
good. To be for Christianity is
somehow un-American. Which brings me to another tweet:
It’s not that ironic considering that one of the main
reasons they are protesting is due to the biased libs changing history in
classrooms.

I grew up learning the support of
the Christian community aided in abolishing slavery, one of the greatest evils ever accepted as something supposedly good for America. If anyone believes taking the
role of Christian Americans out of the history books is good for our children,
then evil’s mask is present in the form of a weak caricature of
reality.
If Twitter had been
around in the 1520s, this statement from Martin Luther (in 140 character
increments, of course) might still be re-tweeted today:
Though our children live in the midst
of a Christian world, they faint and perish in misery because they lack the
Gospel in which we should be training and exercising them all the time. I
advise no one to place his child where the Scriptures do not reign paramount. Schools
will become wide-open gates of hell if they do not diligently engrave the Holy
Scriptures on young hearts. Every institution where men are not increasingly
occupied with the word of God must become corrupt.
To the
Christian, this is an eerie portrayal our present condition. Reliance on the Word of God helped form our great nation, and the precepts of Christianity
lie deeply rooted in our past. Even so, our future must be upheld by the right understanding
that we are free to believe what we will. All of us. If one American is denied this right, we all lose.
But we’re
being taught by the whims of society, or the media, or the politicians to believe
that what is good is bad. A Christian worldview is unacceptable. Yet it’s the
same evil of the ages wearing a mask to convince us that what is bad is good.
As for those
of us who claim Christ, our government, for now at least, protects our right to
freely believe what we will. Here’s the truth about radical Christians: We do
not believe in any form of racial supremacy. We do not hate the difference, but
rather embrace it. We are multi-cultural, multi-ethnic, diverse, accepting, and
loving. We are friends. We are family. A demonstrator of hate who calls himself
a Christian is a liar. He might be radical, but he’s not one of us.
This picture is another gem
from Twitter: 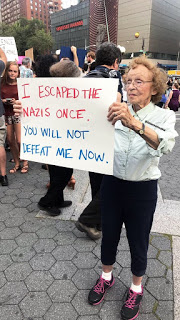 A woman who survived the thick of the fight is ready to fight again. I don’t want
that kind of war for this dear woman, or for my Christian brothers and sisters, or for my country. But
someday I may face a battle like the one she endured. I pray I’m equipped to
stand unafraid against the contortion of evil masking itself as good.