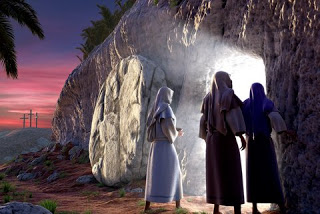 On the first anniversary of the resurrection of Christ, what
kind of celebration took place? Was it dutifully noted as a special day? Perhaps
the fervor of the early followers had not yet waned, and so they simply paused
for a moment to remember that a year had passed since their lives were
transformed by the Risen Lord. And then they swiftly went on with their mission
to tell what they had witnessed. To proclaim the truth. To extend the reach of
the Gospel. After all, that was their commission.
History suggests the first Christians remembered the death
of Christ with a Passover meal, but there was no formality in observing the day
of His resurrection. Special days for the Christians were still primarily
Jewish events. Early Church historians note that changes occurred to allow a
more comfortable transition into the faith for those coming from pagan
traditions, and to peacefully transfer Christianity from its Jewish roots into
the larger order of things. Of course, much was gained in the matter of
extending the Gospel. But was something lost? Perhaps the early Church didn’t
cling to tradition. Maybe reaching the world—all of it—was worth giving way to
change. 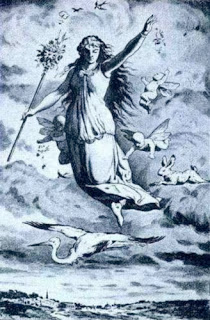 In the course of time, Sunday became the day to remember the
death and the resurrection of Jesus, and the traditions of Easter became part
of the Christian faith. A few interesting bits of Easter history: It’s widely
known the name of our modern holiday is derived from the pagan goddess, Eostre
(Ishtar, or Ostara), but did you know the Easter egg is rooted deep in Babylonian
legend? Or that the Easter rabbit was said to lay eggs as gifts from the
goddess for all good children to eat?
Christianity redeemed the eggs by giving
them a spin to representations of faith. One tradition says the rolling of the
egg symbolizes the stone rolled away from the tomb. At some point,
the eggs were tinted red to represent the blood of Christ. No matter
their origin, the pagan icons are are vaguely remembered in modernity, and the same can be
said of the symbols of Christianity. All has come to this: plastic eggs filled
with candy delivered by an oversized bunny who walks upright.
Pagan influence colored the true story of the day Jesus rose
from the grave, but earlier history does not leave out its Jewishness. For instance, in a tradition not typically associated with
Easter, some writings indicate first-century believers fasted on Wednesday and
Friday before the Sunday marking the resurrection. This is not as easy for modern
Christians to consider as it was for those who survived in a less substantial environment, but fasting is part of the Christian experience as taught in
Scripture. Maybe a day or two spent in obedience to this doctrine would help to prepare our hearts for a truly meaningful Resurrection Day. As it is, we do
well to spend a few moments reflecting on the One who saves us from all
condemnation. Our day is wasted on the trivial. 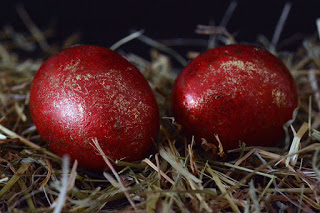 The American Christian has likely grown up spending Easter
Sunday morning in church, followed by an afternoon hunting eggs. Little girls still wear their frilly new dresses. Stuffed bunnies and baskets of candy wait
in the backseats of cars filling church parking lots. The day is Christian and
Jewish and pagan, and the lines are blurred now. But the truth must be kept in
focus.
This is not the day to honor the goddess of springtime or
fertility. We don’t need her rabbit to feed eggs to our children. We may allow
the melding of antiquity to mark our celebration, but never let it define the
reverent and joyous remembrance of our Risen Savior. Like the Easter holiday,
we are marked by unrighteousness. But because of the first Resurrection Day,
we’re redeemed for eternity, alive with Christ our Great Resurrected King.